If you are ubantu user and looking for best screen recorder application for your ubantu operating system then you must try once Simple Screen Recorder(SSR), Because It is best screen recorder for ubantu I found, With the help of this you can easily record video and create demo and tutorials.

SSR Features
* Graphical user interface (Qt-based).
* Faster than VLC and ffmpeg/avconv.
* Records the entire screen or part of it, or records OpenGL applications directly (similar to Fraps on Windows).
* Synchronizes audio and video properly (a common issue with VLC and ffmpeg/avconv).
* Reduces the video frame rate if your computer is too slow (rather than using up all your RAM like VLC does).
* Fully multithreaded: small delays in any of the components will never block the other
* components, resulting is smoother video and better performance on computers with multiple processors.
* Pause and resume recording at any time (either by clicking a button or by pressing a hotkey).
* Can show a preview during recording, so you don’t waste time recording something only to figure out afterwards that some setting was wrong.
* Uses libav/ffmpeg libraries for encoding, so it supports many different codecs and file formats (adding more is trivial).
* Can also do live streaming (experimental).
* Tooltips for almost everything: no need to read the documentation to find out what something does.

Note: Update process will take some time. Be patience.

Step-4: After that run following command to install the script: 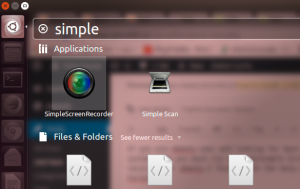